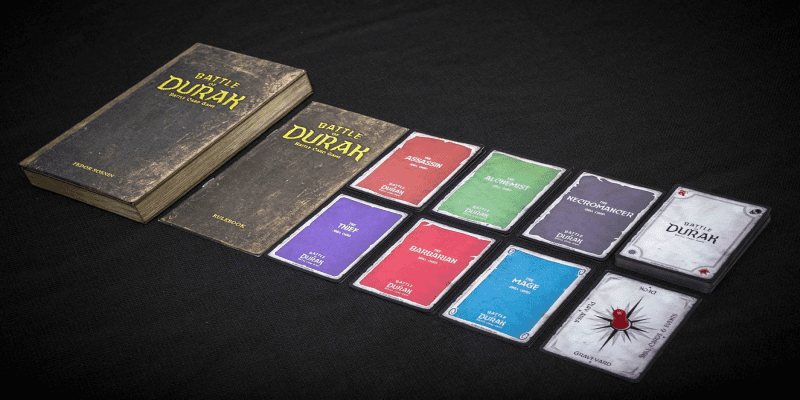 Battle of Durak is a trick-taking card game in which you take on the role of a skillful warrior as you battle it out and attempt to be the first player to run out of Battle Cards. There may be multiple winners but only one will be left the loser after the dust from the battle has settled.

Battle of Durak is a card game that plays in about 15 minutes. It is played with 2 to 4 brave souls. Choose from four powerful character classes and become a Mage, Barbarian, Thief, or Necromancer. Each with unique skill cards and distinct gameplay. The objective of the game is to get rid of all of your battle cards after the deck has been exhausted. The last player with cards in their hand is the loser! An adaptation of the classic Russian card game Durak, Battle of Durak features new rules, complex strategies, and a role-playing fantasy twist. Take turns attacking and defending your way through battle in an effort to add cards to your opponent’s hands while depleting your own. Strategic hand-building is key to winning the game. Hold on to the right cards, play your character skillfully, and prepare for the final battle once the deck is depleted.

Battle of Durak is a light, trick-taking card game in which players take on the roles of skillful warriors as they battle it out and attempt to be the first player to run out of cards. An adaptation of the Russian card game Durak, Battle of Durak features new rules, complex strategies, and a role-playing fantasy twist.