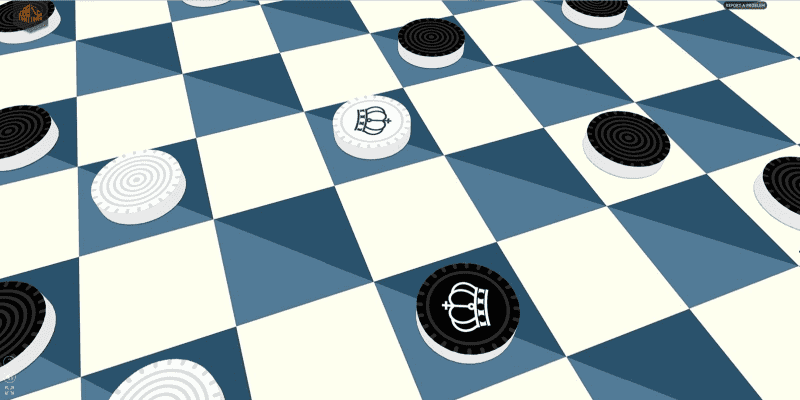 Canadian Checkers is a variant of the Checkers family played mainly in Canada. It is also known as Grand jeu de dames. Canadian Checkers follows the same rules and conventions as International Checkers, the only differences are the larger gameboard (12 12 squares instead of 10 10), and more checkers per player (30 instead of 20). The main differences with American Checkers are 1) Allowing backward jumps (but still allowing forward moves only) 2) Giving King the power to move and jump several squares in all directions ... (Flying King - like a Queen on a chessboard). 3) Enlarging the board size (10x10)

It is always interesting when the history of a game comes with a good story attached. Canadian checkers is certainly one such game. It is likely most readers will not be aware there is a checker variant attributed to development in this country, although it remained largely regional, with play focused in Quebec. Look at the legend of the game’s development that I found while surfing the Internet. “Canada is known for many regional legends, and even in the game of Canadian Checkers, there exists a legend about the origin of the Canadian version. According to this legend, sometime during the 19th century, a traveler came from Europe, where he had become enthralled with a game called ‘le jeu de dames’, or Draughts. “Here, in Canada, he tried to reproduce the same game but could not remember the actual number of squares on the playing board so he added an additional row of squares all the way around the game board, which created 144 squares in total.

Therefore, the playing surface of the Canadian checkers game became a 12 x 12 board, instead of the 10 x 10 board of the European checkers strategy game. As a result, this game was named “le jeu de dames canadien” or Canadian checkers. “’Le jeu de dames canadien’, also known as Montreal or Quebec checkers, became a viral game of strategy amongst the French-speaking communities of Quebec, Ontario, and New England. Later, the interest in this Canada checkers board game spread to other communities throughout Canada and is still a common activity pursued by many Canadian game enthusiasts, just as it is the world over.

“In fact, Canadian checkers game is also played in India and Sri Lanka.” I’m not sure I buy the story in the sense the game rules align with International Checkers a game dating back to about 1600 nearly perfectly, except the board size, and element you think a person would remember most easily. Pieces in the game move diagonally forward, but can capture via jump forward, or backward. The capture mechanism makes the game, like International Checkers, much more vibrant than the (American) checkers many of us grew up playing on an 8X8 board. Canadian Checkers also makes use of the ranging king. Kings may move forward or backward any number of squares in a diagonal direction to an empty square. Capture by kings is accomplished from any distance along a diagonal line by jumping forward or backward over an opposing checker or king as long as at least one unoccupied square is just beyond. A capturing king lands on an empty square and continues jumping, if possible, on the same line or by making a right angle move onto another diagonal line. The power of the king is obvious and on a 12X12 board, the movement option is truly ramped up.

The larger board and added pieces do give the game a unique feel, the array of pieces when a game starts seems staggering, especially if you have generally played the more basic 8X8 checkers. However, the game draws so completely from the excellent International Checkers game, which is vastly more popular worldwide, there is little to recommend the Canadian game as more than marginally better.