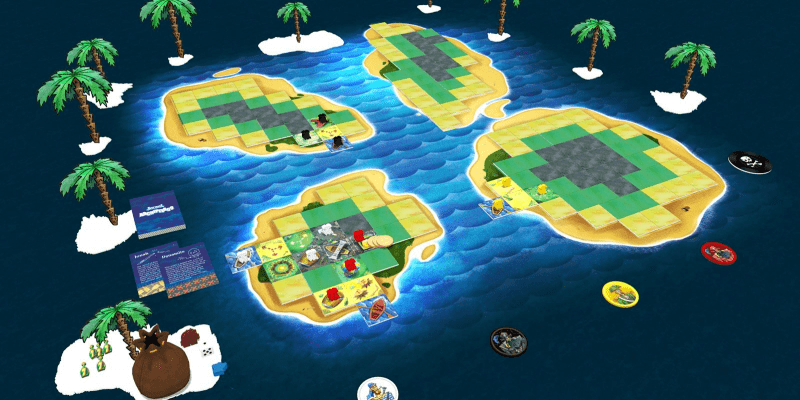 Several days ago, a suspicious man appeared in a tavern near a pirate bay, claiming that he had a treasure map of Captain Jackal, and he was ready to sell it for a reasonable price. But you did not know that he had already sold copies of this card to three more sea wolves.

Board game Jackal: Archipelago – it is a new release from the publishers of the popular game Jackal. The boardgame. You and three of your friends (rivals) are captains of pirate ships, who sent their ships to the island, according to rumors full of treasures.

In the game, in each lap, a new island will be waiting for you, that you collected from the same cells, which will have to be explored. Perhaps, you will fall into traps and stumble upon trials, but, finally, you will find hidden treasure chests. However, your adventure will not end, and you will have to drag heavy chests filled with gold to your ship.

Generally, the authors retained the mechanics of the basic game, but there are several interesting changes, which I will describe. Firstly, the islands are smaller: now you have more chances to meet the pirates of the enemy ship and to start a battle, which makes the gameplay even more dynamic. Secondly, the randomness has become less: each island consists of three areas - the shore, the jungle and the mountains.

The authors made the game Jackal: Archipelago deeper: now pirates can develop and receive special skills, which will allow you to think through the strategies deeper, relying on the special skills of your team. Also, the game became friendlier to the children: earlier on the box, there was a mark "16+" because of the pirate drinks.

Now the game is available for children, and in bottles instead of grog and rum pirates will find secret messages. Also, single missions appeared in the game, in case all other pirate ships are crushed and you have no one to play with - why not conquer the uncharted island alone?

The game Jackal: The archipelago certainly worth buying for the great atmosphere, the excellent quality of the components, the updated artistic part and, nevertheless, the spirit of piracy. Yo-ho-ho!