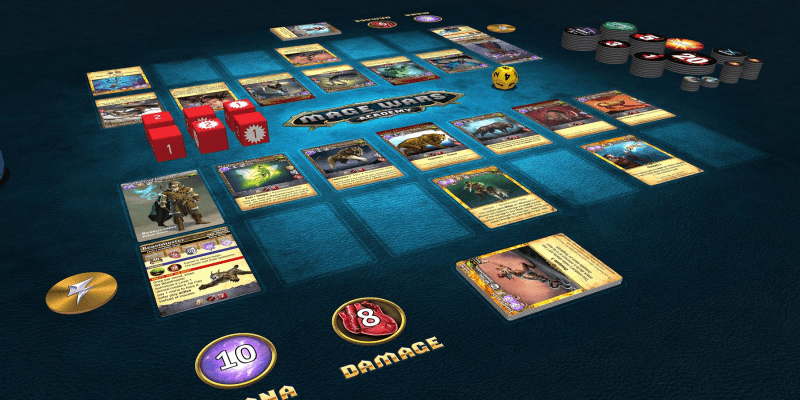 Mage Wars Academy, a 2-player card game from Arcane Wonders. Each player is a wizard, trying to lower his opponent's life points to zero. Does that sound like Magic: The Gathering? Yes, broadly. But Mage Wars Academy is a distinct beast. Will it put a spell on you, or does this spell fizzle out? Let's find out!

Mage Wars® Academy introduces an entirely new, stand lone game to the exciting Mage Wars® universe of Etheria. Similar to Mage Wars® Arena, players will take on the role of dueling Mages, attempting to use their cunning, wit, and tactics to defeat their opponent by reducing their life to zero. Completely different from Arena though, Academy is played without a board, in a much faster time and yet still offers strategic choices, tactical combat, and exciting gameplay!

There's a big gameplay difference that should immediately shut down any comparisons to Magic. In Magic you draw cards from a deck, so you may or may not get the cards you want when you want them. But with Mage Wars you can play any card from your spellbook. They're all available from the moment you begin--you just have to be able to pay for them. This can cause some analysis paralysis, depending on the person you're playing with. Or depending on you, I suppose. You're each trying to reduce the other wizard's life to zero using five different types of spells.

●   ​​​​​​​Creatures – You'll summon creatures onto the battlefield to fight for you. They have Life and Armor, and they'll fight for you until they're destroyed.

●​​​​​​​   Incantations – These spells have an immediate and one-time effect on the game. It might be destroying another spell, or healing a creature.

●​​​​​​​   Enchantments – These spells target objects or the zone. An Enchantment starts out facedown, and then you reveal the Enchantment when you want to spring it on the opponent. So, for example, you can Giant Growth one of your Creatures or Shrink an opponent's Creature.

●   Attacks – These spells are a one-time attack on a creature. After housekeeping things such as passing Initiative, gaining Mana, and so forth, you'll reach the Action Phase.

This is the main part of the game, where you cast Spells, attack your opponent's Creatures, and your Creatures take actions. Players take turns taking actions until there are no more activations left. When you reduce your opponent's life to zero, you win. There are rules for multiplayer team and free-for-all games, but I haven't tried them. I hate when 2-player games try to make themselves multiplayer.

One of the biggest advantages of Academy over Arena is the time commitment. Because you're maneuvering on a board in Arena, the game takes considerably longer. Mage Wars Academy takes around 30 minutes, which is much more appealing to me. Mage Wars Academy is a great introduction to the Spellbook system of Mage Wars and a fun game in its own right.