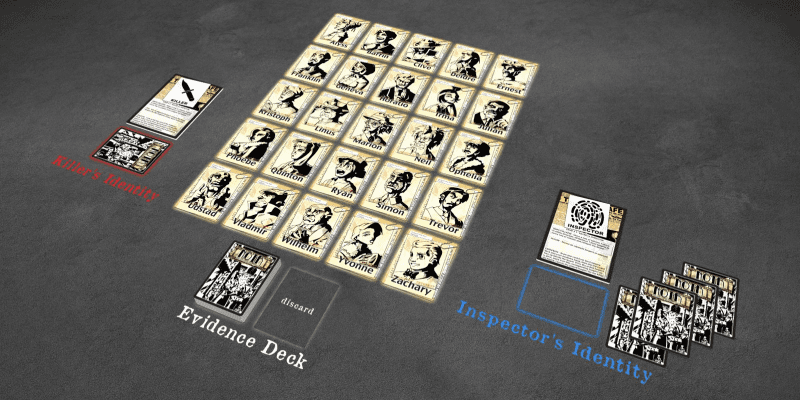 The cold night in front of the detective is lit for just a moment as he pulls the match toward the cigarette in his mouth. He knows the killer is near, but he isn’t sure precisely which of the suspects is guilty. Worse, if he gives away his own identity, he could be killed himself. In Noir: Black Box Edition, a detective, and killer face off in a game of cat and mouse. Noir Deductive Mystery Game Black Box Edition, by D. Brad Talton Jr., is a tactical game of investigation, deduction, and hidden identities. Actually, it's six different games.

Noir is a set of games that all have the same basic premise and mechanics. In each, the game begins with a grid of suspects being laid out. Each player is then given a secret evidence card that reveals who they are on that grid. The game plays in 5 to 15 minutes, and is contained in a 54-card deck box for easy travel play. During his turn, a player can take certain actions on the grid to affect cards that they're adjacent to, and he can also "shift" the grid by pushing a row or column so that the last card falls out of the grid (and is then put back in the first space). The object of shifting the grid is either to get your character closer to certain people or objects or to obscure your position. Many games also allow for more widespread canvassing, to reveal if a character is within a certain area.

The six games are:

● Hitman vs. Sleuth (2 players). This time, the killer has a list of specific people he wants to kill.

● Spy Tag (3-6 or 8 or 9 players). The players are all trying to capture each other. Enough captures, and a player wins. With six or more players, teams count up their "trophies" to see who wins.

● Master Thief vs. Chief of Police (2 players). A thief tries to steal adjacent treasures while a police chief tries to catch him.

● FBI vs. Mafia (6 or 8 players). In equal teams, the mafia tries to kill suspects, while the FBI tries to catch them. Different special roles for different players provide unique actions.

● Heist (5-7 players). A team of thieves tries to crack four safes (each of which requires extreme coordination) while a chief of security tries to catch them. Special powers for the thieves give different players unique actions (and also escalates the game, as they get better later on).

Noir is fun. It provides a wonderful experience in a tight package. It’s something quick enough to play while waiting for others to show up on game night, yet robust enough to be the main event with some of the deeper game modes. There’s a lot to like and nearly every gamer with a penchant for deduction will find something enjoyable here.