Peak Oil: A Game About Crisis and Profit. Read The Review! 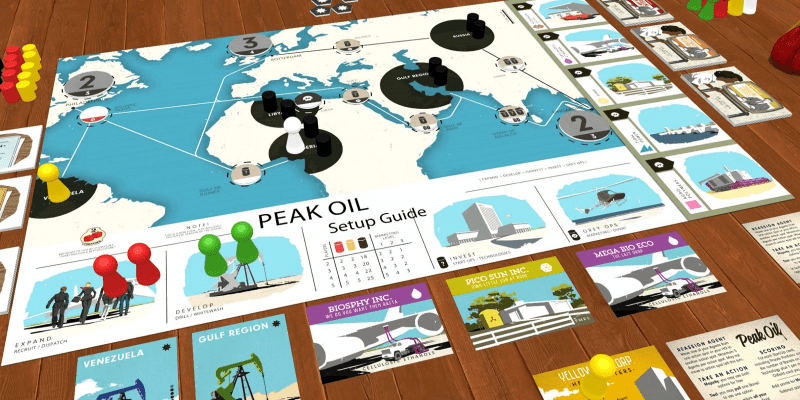 Peak Oil is looming ahead and you, the chief executive at one of the large oil companies, need to lead your enterprise on the way into a future without oil. You will squeeze the last drops from Oil Fields around the world to gather the resources that allow you to invest in various oil replacement technologies.

While you may try to emerge from the coming crisis through legal means, your competitors most likely will not, and force you to dirty your hands as well. On your turn in Peak Oil, you assign your agents to different action spots on the board. If your agents are in the majority at any given action spot, or you decide to send mercenaries to their help, they squelch the competition there and allow you to take the linked action.

Actions include developing and harvesting oil fields, building pipelines, hiring new agents, buying new ship contracts, investing in oil replacement technologies, conducting PR campaigns, engaging in piracy, and manipulating public opinion and oil prices. After some time, the oil — represented by a set number of small barrels you draw from a bag when developing new oil fields — will run out. This is called "peak oil" and marks the end of the game. Players tally the value of the technologies in which they invested and promoted during the game. Whoever shaped the future best (i.e., gained favor for their company) wins.