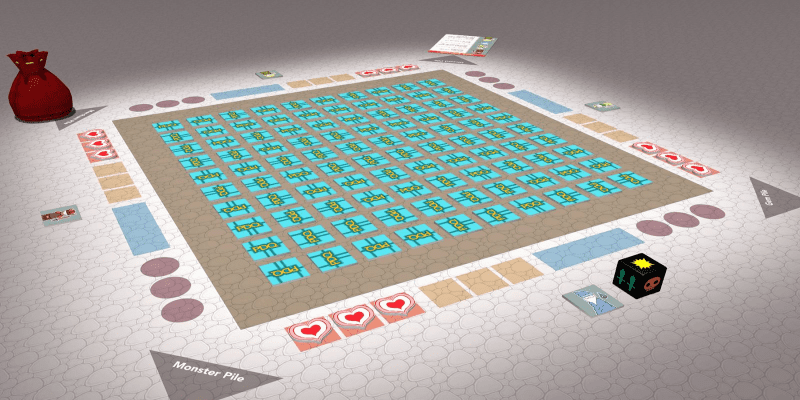 Pocket Dungeon Quest is a unique tabletop game that is inspired by classic video games such as Rogue and Sword of Fargoal. This truly original board game is made up entirely of tiles that represent a dungeon, monsters and the items that could be found within.

At the start of each game, the tiles are shuffled, and the dungeon is randomized creating a new hazardous adventure every single time! PDQ is meant to be played cooperatively with 2-4 players and is modular, which means multiple copies of the game may be combined to create even larger dungeons to explore and allows more players to join the fun!

Basic gameplay begins by randomizing the dungeon. Every player chooses their hero from 4 unique classes. Each class has a unique skill that will aid in the dungeon crawl. The Kickstarter exclusive version of PDQ includes the Adventurer class which will not be released again in any PDQ expansion, ever. Heroes adventure through dungeons, fighting monsters and collecting items and spells that may aid them on their way. By finding the exit the party has the option to venture down to the next floor of the dungeon.

Each new level becomes more and more dangerous, so proceed with caution! Can you defeat the Boss who lurks at the bottom? The goal of the game is straightforward, the heroes must find and retrieve three relics and make it out of the dungeon alive. If even one hero falls then the game is over in true hardcore rogue-like fashion. This is the main objective in Pocket Dungeon Quest.

Because PDQ is modular other goals may be attempted or created by players and could prove to be just as valid and enjoyable. Some alternate goals that have been tested include; Delving Deep - How deep into the dungeon can you go before your hero falls? Monster Slayer - Slay as many monsters as you can before falling prey to their menace!