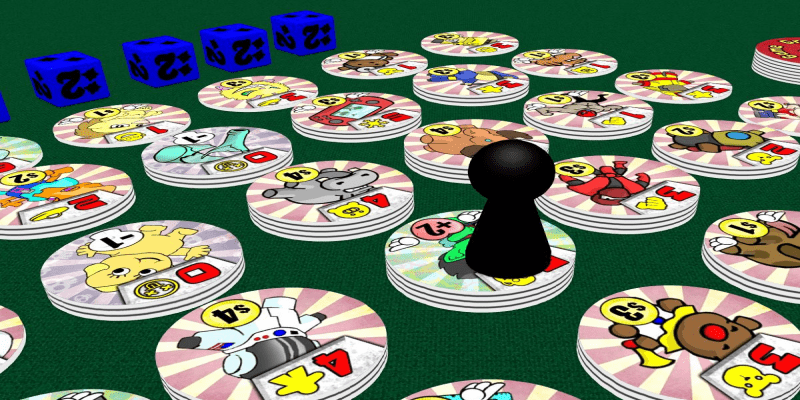 Have you ever played one of those claw games in an arcade or store, where you try to get the claw to grab a stuffed animal or silly toy and drop it down a chute? I had a friend that was uncannily good at those games. He had a whole shelf full of the stuff he won from those claw games. Whenever I played though, the claw would grab the prize I wanted, only to slide right off it, like a Chicago Bears wide receiver trying to catch an end zone pass. Well, in Greedy Claw you'll have a much better chance of getting prizes, but can you get more than your opponents? It'll take some skill and a fair amount of luck to collect the most valuable toys. Keep in mind, I was reviewing a preview copy and aspects of the game’s art and design are likely to change.

We all remember going to places like Chuck E. Cheese and playing the arcade games. You wasted tons of quarters, got hundreds of tickets, and ended up trading them in for a giant novelty comb. Every now and then, you would really press your luck and play the crane game! If you're like me, you always came so close to winning but ended up being crushed because the item ultimately dropped back into the pile of unwinnable prizes. David Sheppard took that experience and turned it into a board game called Greedy Claw Crane Game. It is a dice-rolling and set-collection game for 2-5 players, ages 8+, in which players are operators of a crane game attempting to collect the most valuable toys from the machine. Any given game takes less than 20 minutes and captures the thrill/frustration of those arcade fixtures (known in the industry as “merchandisers”). The game came on Kickstarter in February, but now funding for this project was canceled by the project creator.

In Greedy Claw players will use dice to control either the movement or gripping strength of the claw as it moves around a grid of prizes. To set up the game, you'll first create a 6x6 grid of tokens. The tokens are stacked face-up, with the inner 4x4 square having three in a stack and the central 2x2 square having four in a stack. Then a pawn is placed in a random location in the grid, determined by starting the pawn in a corner and rolling two dice, one for vertical moves and one for horizontal. You'll move the claw pawn around the grid of prizes, trying to pick up the most valuable ones. There are several types of tokens, representing prizes in the claw machine, each from one of seven groups, or families. Most prizes are common awards that are worth anywhere from one to four points. Some rare prizes give you a bonus of two points for any basic prize in the same family.

Others double the value of any one prize. Each player will get assigned a random group that they'll get a bonus point for each token in that family they collect. But be careful if you press your luck too much. There are also some bad prizes (like the broken bottle) that will give you negative points if you wind up picking them up. Collecting prizes gives you points, bonuses, or penalties. And everything you collect that is part of your bonus goal family is worth a bonus point. On your turn, you'll try to collect one or more prizes. Usually, you'll just go for one prize token, but sometimes you'll want to push your luck and try to "Wing It" and go for multiple tokens. If you grab a token with little wings on it you'll get to take another turn. But there's a catch. Two, actually. First, if you fail to pick up another token you'll drop the "Wing It" token and won't get anything. Second, on your extra turn, you don't get to use any of the dice you used as grips to pick up the prior token. So your available pool of dice dwindles as you try to grab more tokens. If you grab that Wing, it bears first you can then take an additional turn to go for another token. This might be a good point to explain exactly how you try to collect prizes. You'll start your turn by rolling the six dice. Each die has a combination of numbers for movement and bursts for grips.

You'll get to decide for each die if it should be used to move the claw pawn or to grab a prize. If you use the die for movement, place it on the token where you the claw pawn is at and then move the pawn in a straight line the number of spaces indicated on the die. To use a die for grips, set the die aside. You have to use at least two dice before you reroll any unused dice. Then you have to use at least two more dice before a final reroll. At the end of your turn, you have to use all your dice for either movement or grips. If you have grips at least equal to the grips required to pick up the token the claw pawn is on you can collect that token.

If you ever empty a stack of tokens the surrounding toys will fall into the vacated space, a nice thematic element, although it adds to the fiddliness of the game a bit. Here I moved to the right two, up two, and the right one then spent six grips to pick up that Wing It token. If I want to, I can use those three dice used for movement to try for another token, but if I can't pick up another, I'll lose them both. If you picked up a "Wing It" token, you could try for another token, as described above. Otherwise, pass the dice to the next player. Players take turns until someone has collected tokens of a specific value, depending on the number of players, and then the current round is finished. Players tally up their scores, including bonuses from rare prizes and their personal goal. The winner is the player with the most points!

Greedy Claw Crane Game is a light filler game. You won't find a whole lot of strategy here, beyond the obvious maximizing points each turn. The dice also add a lot of chance and randomness to the game. But Greedy Claw does a pretty good job for what it's intended for. It's light, easy to learn, good for the family, and a fun theme.