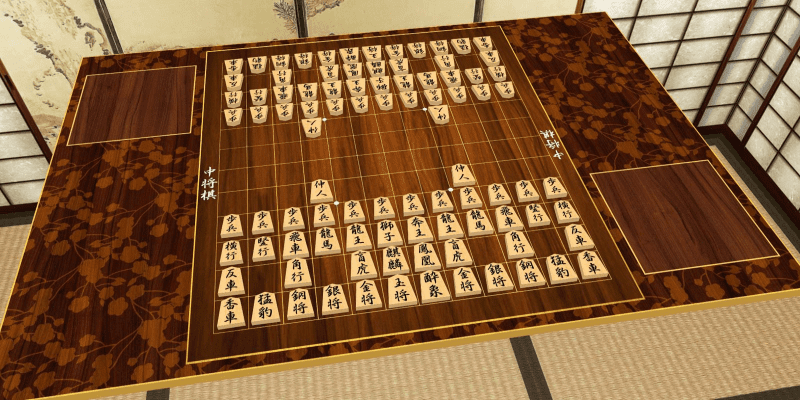 Of Japanese origins, Shogi is played on a 9 by 9 board, and the object is to capture the opponent's king. There are two main differences with Western chess. First, not only pawns but almost every piece can promote if it reaches the opponents three last rows. Second and most distinctive characteristic is that captured pieces become property of the capturing player and during his turn, he can "parachute" or "drop" them back to the board instead of performing a normal move. Because of this feature, similar to Bughouse, the game can last longer than a Chess game, the board generally stays fairly crowded and there is no simplification going into the endgame.

Each player starts the game with 20 pieces arranged across three rows on a large wooden checkerboard. The player with the black pieces starts, and the game ends only when one player is unable to move without losing his or her king (like in chess, this is called "checkmate"). You can use your knights, bishops, pawns, and other units to capture your opponent's units by correctly moving into his or her squares. Like in checkers, if you move one of your pieces into an opponent's starting row, you can flip the piece to give it added abilities.

Flipped pieces are more dangerous due to expanded movement options but sometimes move with very different paths than the starting side allows. Additionally, some pieces, after being removed from play, can be placed back into play nearly anywhere on the board, which may blow more than a few minds. Shogi matches are not only exercises in tactics and strategic trade-offs, but also an endurance test of some seemingly interminable matches. Playing online offers little chance of connecting with anybody because most people have either passed on the game or given up looking. If you try to start a match, you'll be waiting for quite some time for an online opponent to show up. Sure, you can connect and play with somebody you know, but we found that invitations sent through Xbox Live didn't connect us to the match, and the game would either lock up or hang. Finally, if you do manage to find a random challenger, the population of competitive players is pretty well isolated to the nation of Japan.

Shogi is a great game, and for those who like this type of game, I'd highly encourage you to try it. I can't say everyone should try it, because there are plenty out there that don't like these types of games. Even my wife doesn't really play this game. It is fun though, and with the differences between it and chess, I get a lot of enjoyment out of it. Now if only someone would buy me a thousand dollar Shogi set...