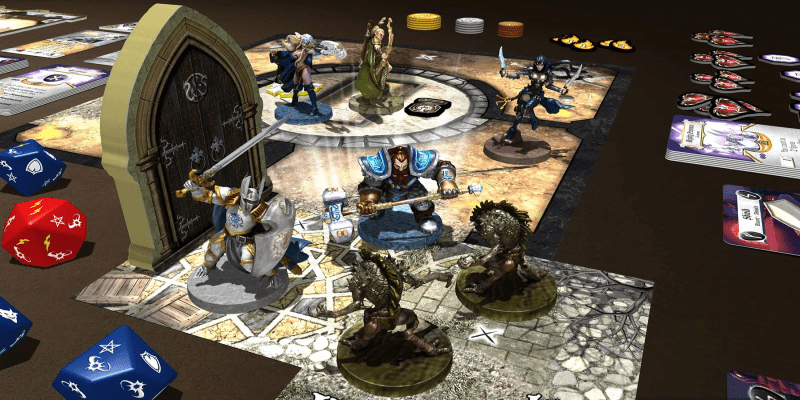 Sword & Sorcery is a cooperative dungeon crawl in which you’re controlling heroes who have been risen from the dead to take on some nasty enemies. The game was designed by Simone Romano and Nunzio Surace and it’s published by Ares Games and Gremlin Project.

Sword & Sorcery is an epic-fantasy cooperative board game in which 1-5 players fight together against the forces of evil, which are controlled by the game system itself. Each player controls one or more heroes – legendary characters brought back to life by powerful sorcery. Weakened by the resurrection, they grow stronger during their story-driven quests. By acquiring soul points during battles, the heroes' souls regenerate, restoring their legendary status with multiple powers, magic and soul weapons, and powerful artifacts.

Designed by Gremlin Project (the same team who created Galaxy Defenders), the game system in Sword & Sorcery represents the perfect evolution of its forerunner. Gameplay is faster and dynamic, thanks to an innovative area movement and area control system, with new features never seen before in a game of this category. Key features of Galaxy Defenders are also preserved in Sword & Sorcery, such as the advanced AI system for monsters, a high degree of character customization, and the multiple tactical options during battles. Sword & Sorcery packs, in a top-quality board game format, all the excitement of the best MMORPGs and action RPGs, to provide the ultimate heroic fantasy board game adventure.

I can totally see why so many people love this game. Some will not mind learning as they go and memorizing all of those interactions, and I’m sure this game is going to be much easier for people to learn if they have a ton of experience with more complex dungeon crawls.

While Sword & Sorcery is not a game for me, I can definitely see it being a hit with others. If you like dungeon crawls and/or fantasy themes, I do recommend at least testing this one out to see if it’s for you.